The first time I thought about creating the rumors tracking methodology I was in Liberia. I had a huge problem: I needed to understand the information ecosystem of the country, work with local media and provide information to the local population and the humanitarian community. In a month. And fight Ebola. Yeah..we have all (more or less) been there.

The rumors tracking came out because everyone I was talking to had a theory about Ebola, and I had listen to so many theories in only one month, that I decided to take that as a sample of my population. Journalists, politicians, colleagues, the drivers, humanitarian organizations staff..everyone had it’s own theory about everyone else.

When we started the work with UNICEF, which offered us to use the short code that they were already using for their U-Report project, and to access the data via their Rapid Pro platform, I met the Head of Section for the UNICEF C4D Unit in Liberia, Rania Elessawi. One beer (or more) later, the project was already happening. She had been struggling to help her teams on the ground, the one risking their lives going door to door to sensitize communities about Ebola, because their reach, for as wide as possible, was never enough. I had radios and content. She had the field network and the expertise.

This is how we ended up creating a database of 2,500 people in between religious leaders; women leaders; journalists; community health workers; social mobilization officers; ETU staff; red cross volunteers and others. This network of people listening and talking to communities on the ground was now able to report rumors and receive answers over SMS.

On the ground, the information given to them was also fed to the local media, so that all the major information sources and trusted sources would deliver the same message and reinforce each other. The all point of tracking rumors was the we had the network and the ability to stop them on the ground. The rumors tracking was a necessary passage to achieve change in perceptions, but also change in services provided – in this case making sure that communities were respected and involved in the decision making processes about themselves.

As the first rumors tracking mechanism, in that situation we were experimenting really and it worked. We tried, and assessed and adapted ending up with a self sufficient loop where religious leaders, community leaders, women leaders, youth leaders, local authorities and health authorities were able to work with “their” local media to create content but most of all to engage in a conversation with the local community.

As the emergencies go by, Internews replicated the system in Nepal, in Haiti and in Greece. This last one was a very interesting project and probably the most sophisticated we have ever done. In Greece the rumors we were tracking had a totally different dimension to it, due to the fact that the population was indeed moving, and the rumors were moving with them.

As we started our initial assessment, we realized that one of the most important component of the information ecosystem, trust, was not necessarily obvious. Who would these people trust now that they were “on the move”? As we did in Liberia, we were looking for the big numbers: how can we build a big network of trusted sources? Especially when the trusted sources are moving away? Well, we couldn’t.

So, we created a smaller network, made of a self selected group of migrants and refugees in almost all of the locations of camps, arrivals or other form of settlements. The network was also somehow changing, depending on the day in which our staff would visit that specific location.

What we discovered than was something that changed the way we are looking at rumors: while it was possible to start identifying rumors by their spread (or their statistical representation in terms of numbers), this was not necessarily the best way to really address rumors. Because when a rumors is spread or representative, it is already too late.

So, while it will always be important to stop the rumors that are already spreading, the one that are not out there yet, those are the one that we have to look at. For example:

If 2,000 people have been locked in a island in country X, and they have no idea what is gonna happen to them; why they are there; what’s next; etc, and ONE single person says that he thinks there is a boat down at the beach ready to bring them to country X mainland..how much time do you think it will take for that rumor to spread? and most of all, what could be the possible consequences of that rumor for the people believing it?

The issue here is that to be seriously addressing rumors we need to stop thinking about “data validation”, “verification” and “statistical representation”. Those concepts do not really apply to something that you need to prevent from happening. The only way to look at those rumors is not by their value as of today, but by thee potential negative impact on the affected population combined with the likelihood of that rumors to be believed.

And here is the second paradigm shift: when people have hope, they will believe anything.  As very well explained here: 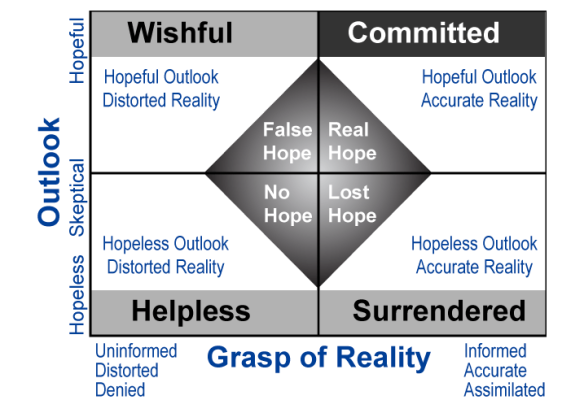 In Greece we realized that rumors do not necessarily spread following the normal information ecosystem matrix, where trust is one of the strongest variable in defining information sources. Those with stronger trust normally, are the most important influencers in the conversation. But when people have false hopes, the level of trust does not matter anymore so much – people can be strongly influenced by a non-influencer, or a temporary one. For example one single refugee saying that the border with Bulgaria is open and if people run there they will be able to leave Greece it’s enough to get hundreds of people to run to the border.

This is why when we look at rumors, we do not look at it as any other piece of information, like perception surveys (70% of people liked the water pump, therefore the water pump is good) – we need to look at it in its singularity: one rumor, shared by one person at the right time, and with the right people, has far more potential to negatively impact the local population or the humanitarian community than a rumor that 50% of the population agrees on.

This is what makes a rumors tracking project successful: the ability to understand and recognize the potential impact of a rumor, it’s likelihood to be believed, and the ability to understand what piece of information is needed to proactively correct what was not understood without spreading the rumor (it goes without saying that something like “someone said XX but this is not true” is not a good way to address rumors).

This is also the secret of really using an Information Ecosystem Assessment in a meaningful way: understand how the system adjust itself when variables are introduced and how that changes the way communities are using, understanding and acting on information received.

And, as the last point: tracking rumors makes no sense whatsoever if you are not able to act on them, and if you do not understand or have the power to deliver the right information, at the right time, to the right people. To be able to do so, you will have to abandon the all idea of statistical representation and verification, and you have to focus on the potential and likelihood of a rumor to have a negative impact. To do so, you have to engage communities and make sure they are involved in actually analyzing the rumors. Yeah, I know. You actually do have to work with the communities themselves to make sure you know what the potential is.

Also, Rumors are NOT counteracted with MESSAGES. They are counteracted by DIALOGUE and the reason is that rumors changes continuously and are strictly related to very volatile preconditions: emotions and information flows.

For more information about rumors, CDAC has just published their Rumors’ Guide here.

And if you are seriously thinking about doing Rumors Tracking, feel free to ping me anytime 🙂

1 thought on “How hope changes the information ecosystem – understanding rumors”